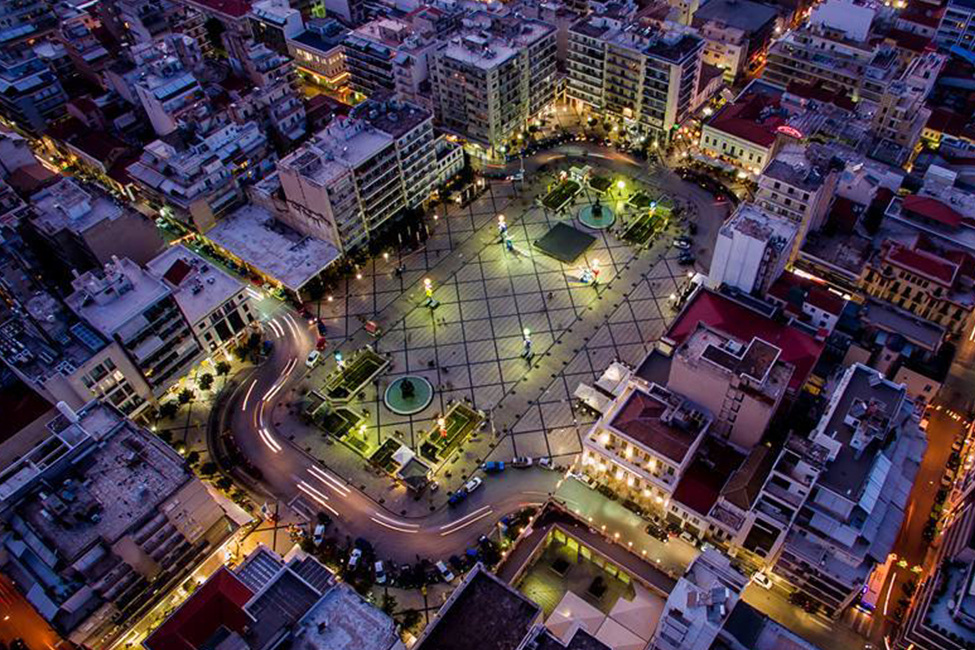 Patras is a vibrant city with an approximate population of a quarter of a million with very attractive and exciting events and lots of amenities. It successfully combines the advantages of a modern city with the charm of one with a very long history. The city offers a wide variety of cultural opportunities with many musical, theatrical events and festivals. In the Municipal Art Gallery and at several private galleries, painting and sculpture exhibitions by local and internationally known artists, take place. The most ancient traces of permanent human settlement in Patras have been traced during the Early Helladic period in the middle of the 3rd millennium B.C. and since then the area has been inhabited continuously.

The proximity of very important monuments like ancient Olympia, Delphi, Epidaurus, Mycenae, makes the region very attractive and adds touristic values at the highest standards. The year's round mild climate provides many opportunities for outdoor activities.

The city of Patras is the capital city of the Prefecture of Achaia and of the Region of Western Greece. The region covers the North-Western part of Peloponnese and the Western part of the mainland.

In 1880, Charilaos Trikoupis was elected Prime Minister of Greece. Born in Nafplio, he envisioned the union of the region of Messolonghi from which he descended, with Achaia, in the Peloponnese. On March 29, 1889, he spoke to the Parliament about the need to bridge the Rio-Antirio Strait. However, the construction of this project was not technically possible until the end of the 20th century.
The Rio - Antirrio Bridge is part of the European motorway network. It is located at the crossroads of two important roads, namely the Ionia Odos (the Ioannina - Antirion motorway) and the Olympia Odos (the Athens - Korinthos - Patras motorway), which are part of a modern network of highways that will connect the most important Greek cities. The Bridge also facilitates communication between Greece and Italy (and consequently with Western Europe) through the ports of Patras and Igoumenitsa.
The Rio-Antirio Bridge is the longest cable-stayed multi-opening bridge in the world, with a continuous and fully suspended deck of 2,252 meters and has been honored by the international scientific community with 9 International Awards. 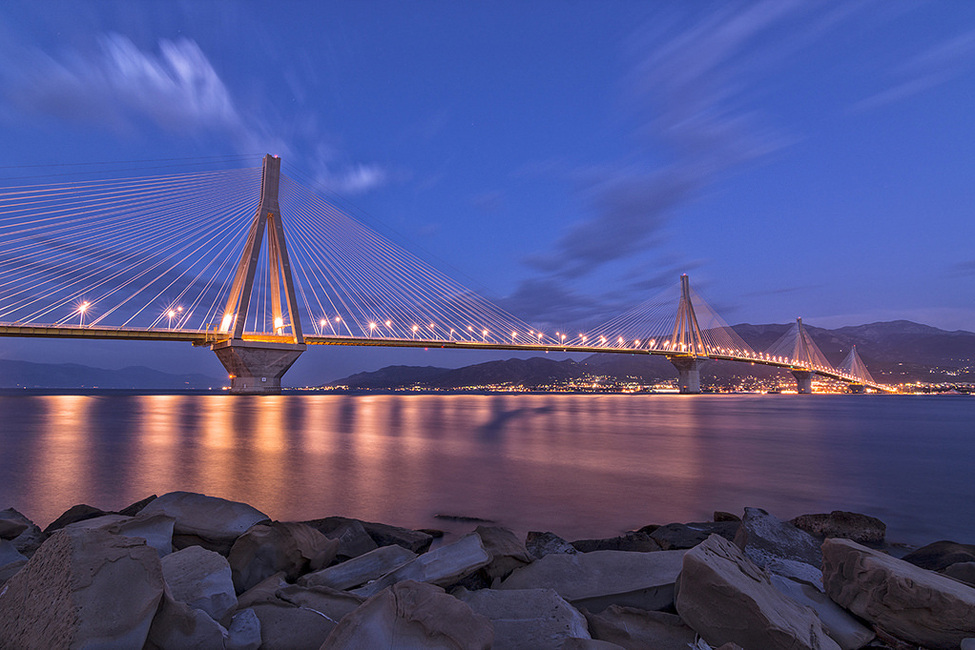 This vast basilica was started in 1908, but because of the tumultuous events of the 20th century wouldn’t be consecrated until 1974. The Agios Andreas Cathedral is the largest church in Greece and the third largest Orthodox edifice in the Balkans.
The church is a pilgrimage site for Christians the world over as it contains the purported relics of St Andrew, one of the 12 Apostles.
In a chapel to the rear on the right side are fragments of the cross on which he was martyred, as well as a finger and the top of his cranium.
The piece of skull has been at the Agios Andreas since 1964 when it was sent from Rome and received with great fanfare.
Also take in the sumptuous neo-Byzantine mosaics on every surface, admiring the Madonna with Child behind the iconostasis. 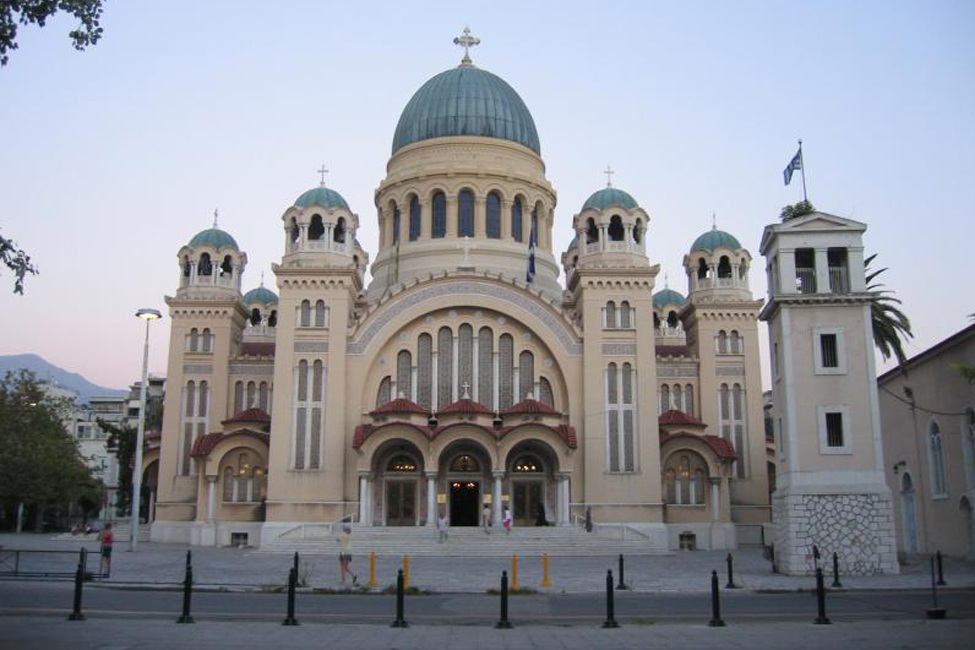 The recent story of Patras is one of destruction, either at the hands of the Turks in the War of Independence or frequent earthquakes. So it’s no mystery why only scraps of Patras’ old signature Neoclassical architecture has made it to the 21st century.
Some of the few exceptions await you on Georgiou I Square, and the most eye-catching of all is the Apollon Theatre on the northeast side of the square dating to 1872. Take a seat at a shaded cafe table next to the theatre’s arcades, look over the fountains and give yourself a few minutes to see the people of Patras coming and going. 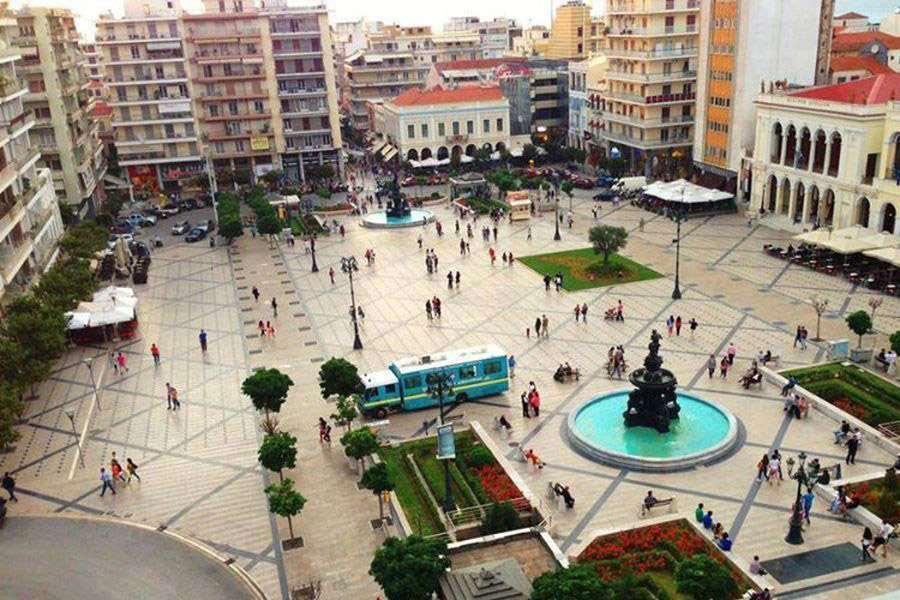 The Medieval Castle of Patras

Also at the top of the city, one of the first things that will strike you about the castle is how far you can see over Patras and the channel. The castle was built in the mid-500s AD on the ruins of the ancient acropolis.
From the time it was completed to the Second World War the Castle of Patras was constantly armed. A long list of cultures and civilisations have either besieged or taken the castle, among them Slavs, Moors, Normans, Franks and Venetians. The Ottomans were in charge from the middle of the 15th century and later in the 17th-century Morean War, the Venetians wrested it from them for almost two decades before the Turks regained control, in 1715. A remarkable thing about the castle is that all of those occupants left their mark, revealing the development of military technology over the course of 1,500 years. 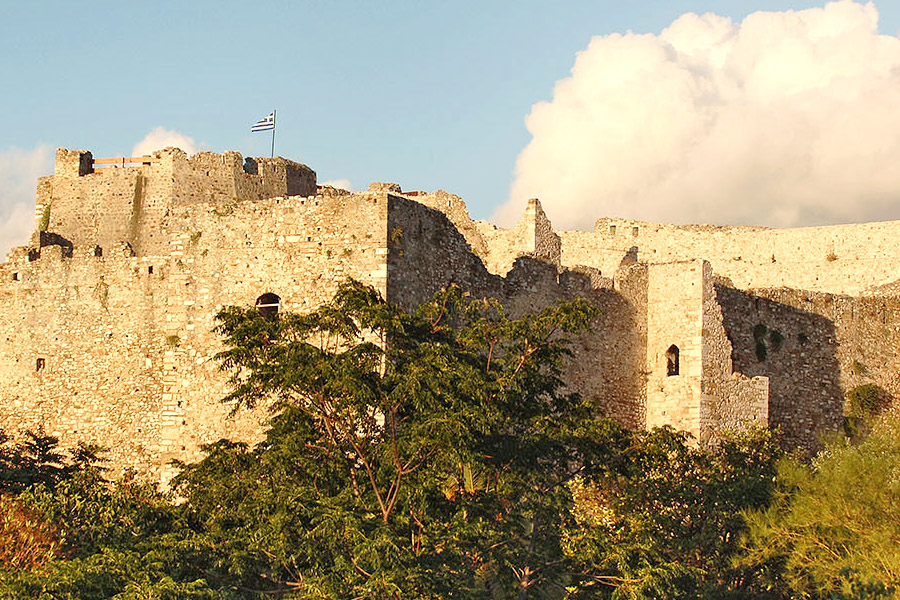 Established by the Bavarian Gustav Clauss in 1861, Achaia Clauss is the second oldest business operating in Greece after the National Bank.
One reason the winery was able to flourish was because of the Clauss’ connections to the Bavarian-born king, Otto of Greece. The winery is built like a castle on a picturesque hillside at Glafkos about 15 kilometres from Patras.
You’ll be given an enthusiastic tour of the vineyard and the buildings, learning about the dense history of the winery and checking out giant old barrels, some of which have wine going back to 1889. You’ll get to pose in an old-time cooper’s apron, while there’s a generous array of wines available to taste, including red, white, rose and the trademark sweet red fortified wine, Mavrodafni. 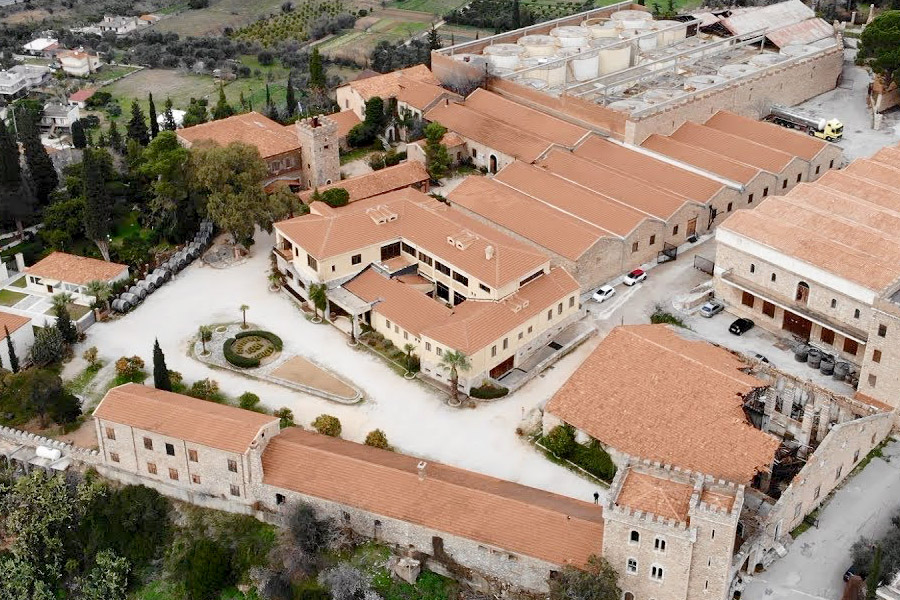 Next to the Roman Odeon are the partially excavated ruins of Patras’ amphitheatre, raised during the time of Emperor Domitian at the end of the 1st century AD. The amphitheatre was first identified in the 1870s, but archaeological surveys weren’t made until the 1990s, a job made difficult by the amount of modern development on the site.
It is believed that the amphitheatre was a gift to the city on the 100th anniversary of the foundation of the Roman colony here.
The eastern side, which is the most intact, is built into the slope, and the edifice measures a total of 200 by 90 metres.
In its day the amphitheatre was known all over Greece for the Caesarea, games in which athletes from far and wide competed in a range of events like racing, pentathlon, boxing and wrestling. 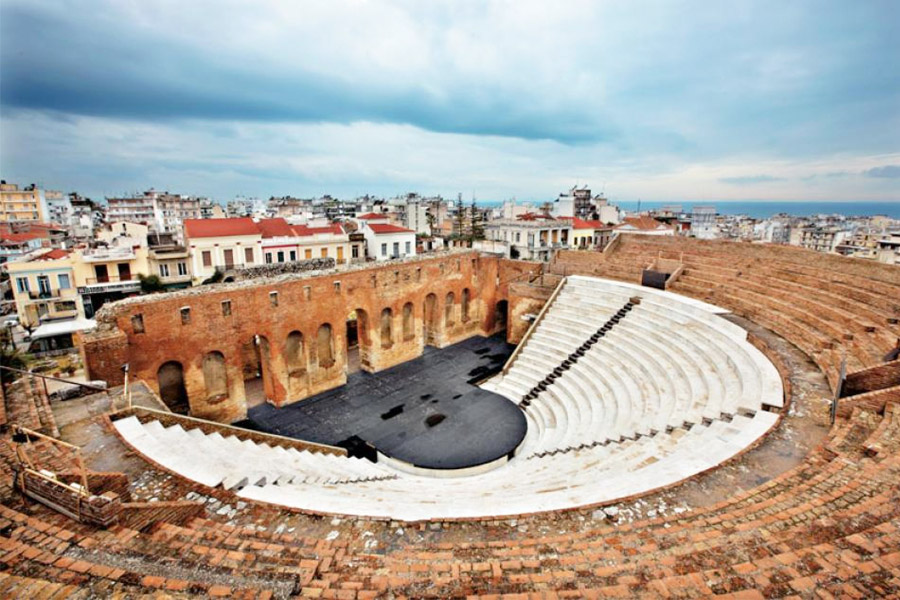 Between 17 January and Clean Monday, the first day of Great Lent (48 days before Easter) on the Orthodox calendar, you can catch one of Greece’s most famous street spectacles.
The Patras Carnival is unique in the country, and is one of the largest in Europe with a riot of masked balls, games and parades attended by tens of thousands of people, as well as all manner of unofficial side events.
The things you have to see are the opening ceremony on 17 January, the Children’s Carnival with 5,000 participants on the penultimate weekend, the Saturday night parade, the Grand Parade with satirical floats on the final Sunday and the closing ceremony, illuminated by fireworks.
Also on the final weekend there’s a treasure hunt, in which the various groups taking part in the parades compete with each other, solving riddles and questions to find clues around the city. 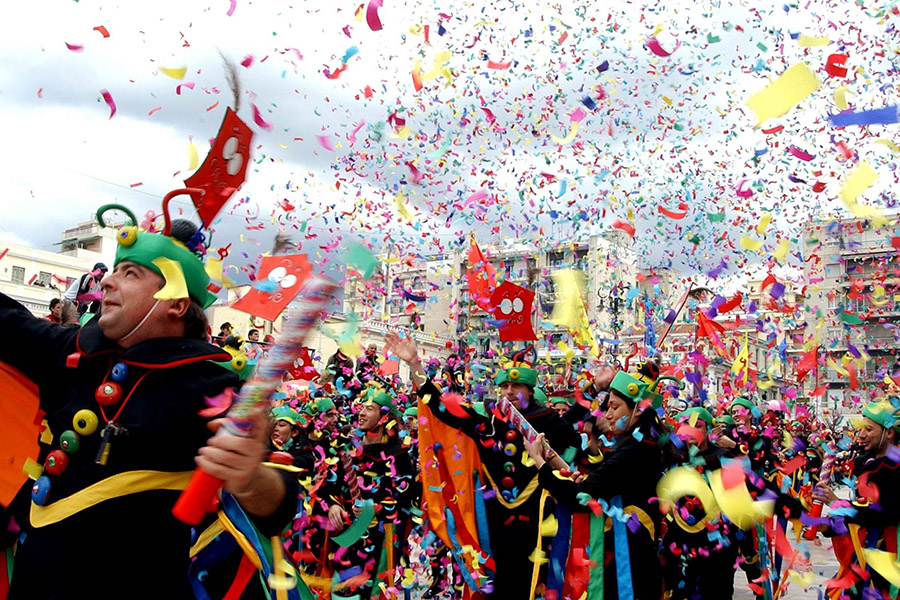 Inaugurated in 2009, the Archaeological Museum is hard to miss from the road for its enormous metallic dome, looking a bit like a fat flying saucer.
When it opened the museum drew acclaim for the clever way it displays its artefacts, organising them in three large rooms (Private Life, Public Life and the Necropolis). Private Life has jewellery and everyday utensils from Mycenaean, Geometric, Archaic, Hellenistic and Roman Greece, a whopping collection of 14 Roman mosaics, as well as partial reconstructions of Roman houses from around the city.
Public Life is loaded with coins, statues, musical instruments, amphorae an yet more mosaics, all painting a clear picture of society in Ancient Patras.
The Necropolis deals with the tombs and the objects within them, found in Patras and around Achaia.
Three whole graves have been reconstructed, two Mycenaean from the Voundeni cemetery near Patras, and one Roman. 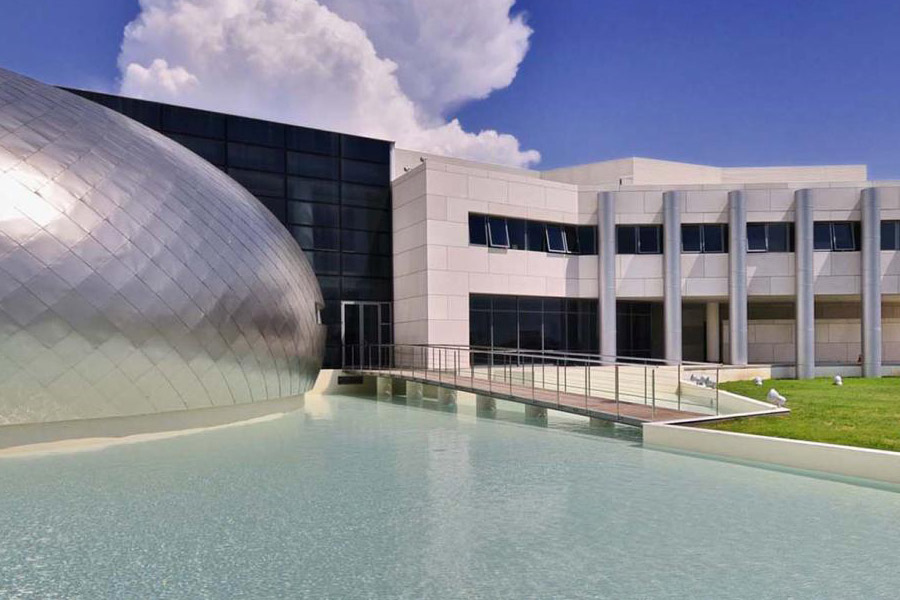 Patras Marina (Patras Yacht Harbour) is a medium sized marina, located on the north side of the city and can accommodate about 450 boats. It offers direct access to the Ionian Sea and the Greek coast. The restaurants of the area are open all year round and will always turn a simple dinner into a romantic experience with your loved ones. Also, travelers have direct access to all services and attractions offered by the city of Patras. 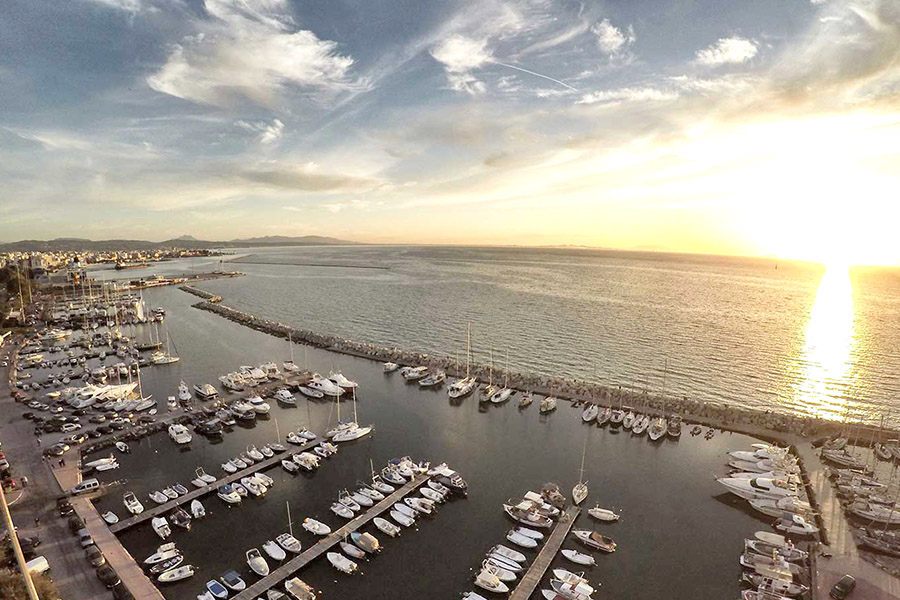 Patras Lighthouse is the symbol of the city. It is situated on the seafront, opposite of the temple of Saint Andrew. The lighthouse of Patras was originally built on the pier of Agios Nikolaos, where it remained until 1972, when it was demolished.
You may be able to tell that the Faros (lighthouse) doesn’t have a maritime role, but instead has more of a symbolic meaning , replacing a lighthouse from 1878 that was pulled down when the port was modernised in 1972. This current building is from 1999 and has a blue glow at night.
At the base of the lighthouse is a cafe and the surrounding area is a waterfront park, facing west and a great place to watch the sunset. 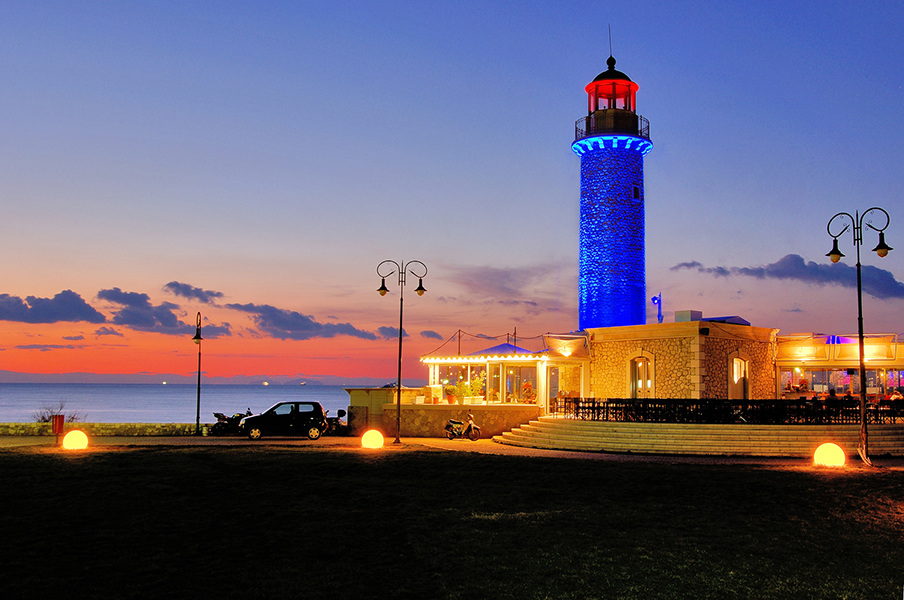 The Skioessa neighbourhood on the road northeast of Patras, is an area with signs of habitation going back 3,500 years. Remnants of a settlement and cemetery have been discovered, in use from 1500-1000 BC. The cemetery to the southeast is the most exciting part for visitors, covering 1.6 hectares with some 75 tombs of various sizes and designs that were first excavated in the 1920s.
You can enter about ten of the tombs, and each one is labelled with details about the items discovered during the digs.
The first tomb has been left undisturbed, so you can see the skeletons of three people, knowing that they have lain here for as long as 3,500 years.
Further up at the ruins of the settlement, the view over Patras and the gulf are unforgettable. 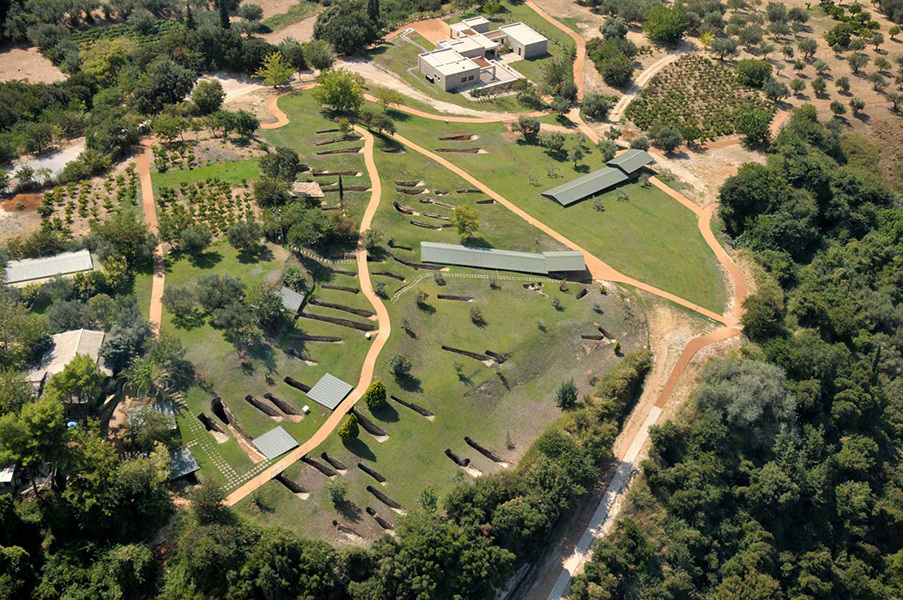 "the other face of health"